After 141 very long days, NBA basketball is finally back!!! Now not to rain on the parade, but the question has to be asked…For how long? Are they guaranteed to finish the season?

Back on July 13, Bruno Caboclo, Forward for the Houston Rockets, broke protocol while in the NBA bubble at the Walt Disney World Resort. The 24-year old, former Toronto Raptor, apparently left his room when players were instructed not to do so, and was forced to self-quarantine for 8 days. 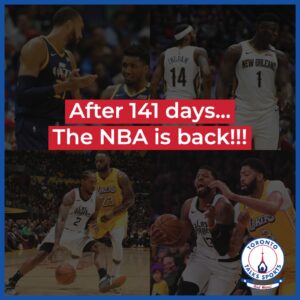 Also on July 13, King’s Centre Richaun Holmes “briefly and accidentally” left the NBA bubble to pick up a food delivery…good ol’ chicken wings. The result…8 days of self-quarantine for him as well. “I apologize for my actions and look forward to rejoining my teammates for our playoff push,” said Holmes at the time.

With all these violations taking place on July 13, Instagram model Anna Mya, took to Twitter, claiming that an NBA player (Who she did not name) had contacted her asking if she would be interested in coming to the bubble to hangout. A clear NBA bubble violation. Later, Montrezl Harrell of the LA Clippers, was identified as the sole NBA player who followed Anna on Twitter… and the speculation began swirling. Montrezl firmly denied these claims saying “why the hell I wake up from a nap and everyone accusing Trezz of something”.

And most recently, and yes, another violation involving chicken wings, LA Clippers guard Lou Williams who was excused from the NBA bubble to attend the funeral of a close family friend, before returning to the Disney resort, stopped off at a well-known gentleman’s club in Atlanta. Not for the female entertainment though, strictly for the food. (Insert serious face emoji and a few eye-winking emojis)

With all that said, these violations are all rather minor, with no real cause for concern. Overall, NBA players have done a really solid job of following the rules and showing their commitment to their teams, the league, and to the fans. We all want the resumption of the season to run smoothly!

Yesterday, the league was happy to announce that once again, zero positive COVID-19 tests were recorded, out the 344 players tested at the Orlando campus. This is great progress and we all should be cautiously optimistic that the NBA season should be able to continue and complete without any interruptions.