The Leafs’ lost 3-2 to the Dallas Stars last night. A late resurgence couldn’t help them tie the game in the final seconds. With last night’s loss, they found themselves with their 20th regulation loss. They’re currently 3rd in the Atlantic.

The Leafs found themselves allowing the 1st goal in a matter of minutes again for the 2nd straight game. They were outplaying Dallas offensively for most of the night but couldn’t seem to make anything happen due to Dallas’ strong defense. They were, however, making a lot of mistakes in the 3rd period which lead to them having to find a way to tie the game with 3 minutes left in the game. They got a goal in the final minute but didn’t have enough time to score the tying goal. Frederik Andersen, his first game off an injury, didn’t look ready at all and his 5 hole was wide open last night. 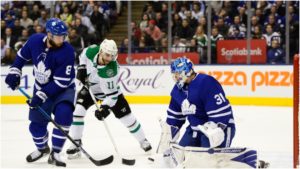 The Leafs haven’t been looking good for the past week or so and need a giant boost. Piling injuries aren’t helping either. Head Coach Sheldon Keefe canceled practice today because of the injuries and flu bug going around.

The Leafs will face the Ottawa Senators on Saturday where backup Jack Campbell will start. Frederik Andersen gets the nod on Sunday against the Buffalo Sabres.

– LW Andreas Johnsson suffered an injury to his knee that had also sidelined him earlier in the season. It will require surgery and he will miss a minimum of 8 weeks. His 3.4M cap hit will most likely be put on LTIR and will give the Leafs more flexibility for the trade deadline.

– D Morgan Rielly was re-evaluated this week and coach Sheldon Keefe says Rielly will be able to put weight on his injured foot in about a week or so.

– D Cody Ceci was injured with an ankle injury last Friday and will be re-evaluated in a month.

– According to an old TSN report, F Chris Kreider of the New York Rangers had apparently placed the Leafs in his 11 teams no-trade clause. If this is true, it makes a trade that brings him here unlikely. Blake Coleman of the New Jersey Devils remains a possibility.