The Maple Leafs & Kings Are Trade Partners Once Again

It had been a year and 9 days since the Leafs acquired fan favourite defenseman Jake Muzzin from the LA Kings. Kyle Dubas, didn’t break tradition, as he went out after a 5-3 loss to the New York Rangers, and acquired local Ontario native Kyle Clifford and backup goalie Jack Campbell. 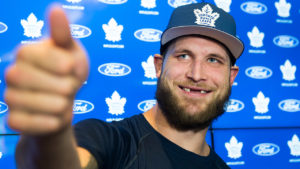 The condition is that the 3rd becomes a 2nd if Clifford resigns with the Leafs or Jack Campbell wins 6 regular season games and the Leafs make the playoffs. It’s almost certain that LA will acquire the 2nd round pick.

LA had also retained 50% of Clifford’s 1.6M, making his current AAV 800k. Jack Campbell currently makes 675k but has a 2 year extension in place that will have a 1.65M AAV. He is also eligible for the expansion draft.

The Leafs get fundamental pieces in this trade for a generally low price. Kyle Clifford brings a great locker room presence, leadership and grit or physicality. Something the Leafs were desperate for. Jack Campbell brings stable backup goaltending to take some load of Frederik Andersen.

Kyle Clifford had 6 goals and 14 points in 53 games with LA this year. He isn’t known for his offense, so this isn’t very important. He is however very good defensively and very good at forechecking. Jack Campbell went 8-10-2 with a .900 sv% and 2.85 GAA. It’s a slight improvement over Hutchinson, but last season’s stats were much more interesting and better. He went 10-14-1 with a .928 sv% and a 2.30 GAA. Remember, he was on very bad LA teams in both years but is still putting up solid numbers.

Dubas hasn’t given up major assets such as Andreas Johnsson or Kasperi Kapanen and it looks like he’s not finished tinkering with this team.

The two new Leafs are expected to make their debuts on Friday, where the Leafs host the Anaheim Ducks at 7PM.