Home > News > Uncategorized > Leafs Updates Ahead of The Trade Deadline

Leafs Updates Ahead of The Trade Deadline

The Leafs have made 4 trades this month, all small deals. They’re still looking to acquire that right handed defenseman or two. 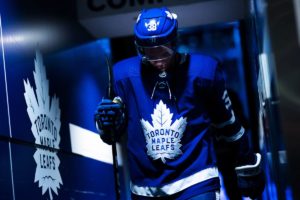 It was reported during the week that the Leafs were listening to offers from teams on pending UFA D Tyson Barrie. 4 teams have shown interest. The Calgary Flames, Vancouver Canucks, and Vegas Golden Knights have significant interest.

Calgary may want to move D TJ Brodie 1 for 1, which would be good for the Leafs since Brodie is very good defensively. Both are pending UFAs

Vancouver may want to move D Troy Stecher in a package for Barrie. Stecher would be a great addition. He’s young, can defend well and can a great puck mover.

Finally, the only way I see Vegas making a trade is their 1st rounder and maybe a prospect. They recently acquired Alec Martinez from LA but are still looking for defense.

The Leafs are reported to have significant interest in Damon Severson from New Jersey, Josh Manson from Anaheim and Troy Stecher from Vancouver.

All would fit the Leafs lineup well. The Leafs have the ability to trade for one of Manson or Severson and also acquire Stecher in another trade.

A defense corps of..

..would be a great upgrade for the Leafs.

Defensemen Morgan Rielly and Cody Ceci are expected to return in the next 3 weeks.

F Ilya Mikheyev is expected to be back near the playoffs.

F Andreas Johnsson will be out 6 months after successful knee surgery.

F Dmytro Timashov has been placed on waivers. He will most likely be traded if he clears waivers, if not he’ll play for the Marlies.

Leafs traded F Mason Marchment to FLA for F Denis Malgin. D Ben Harpur to NSH for F Miikka Salomaki. And finally F Aaron Luchuk and a 2021 conditional 6th round pick for F Max Veronneau. All are AHL trades. However, Denis Malgin is playing for the Leafs.