Leafs’ forward Kyle Clifford came to Toronto with backup goalie Jack Campbell in a trade that took place in February. He will become an unrestricted free agent on July 1st.

The Score reported yesterday that the Leafs and Clifford were in talks of an extension and are both mutually interested. The estimation is 3 years at 2M per. 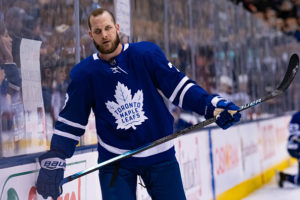 TORONTO, ON – FEBRUARY 07: Toronto Maple Leafs Left Wing Kyle Clifford (73) reacts during warm up before the NHL regular season game between the Anaheim Ducks and the Toronto Maple Leafs on February 7, 2020, at Scotiabank Arena in Toronto, ON, Canada. (Photo by Julian Avram/Icon Sportswire via Getty Images)

If this figure has any truth to it, I think that’s a little bit of an over-payment. Clifford was and will continue to be a big part of the Leafs trying to find their identity, but hardly contributes offensively. If the AAV was let’s say at 1.5M, I’d be happier, but who knows, nothing is official yet. It is expected however that he’d make around that figure since Edmonton’s Zach Kassian, a similar player to Clifford, drove the market up when he signed his extension with the Oilers this year.

It was also reported that former King Jake Muzzin is playing a big part in Clifford wanting to resign because of how much Muzzin loves it here. Muzzin and Clifford won the cup together in 2012 and 2014.

The Leafs and Clifford will continue to talk and negotiate in the hope a deal comes to light.